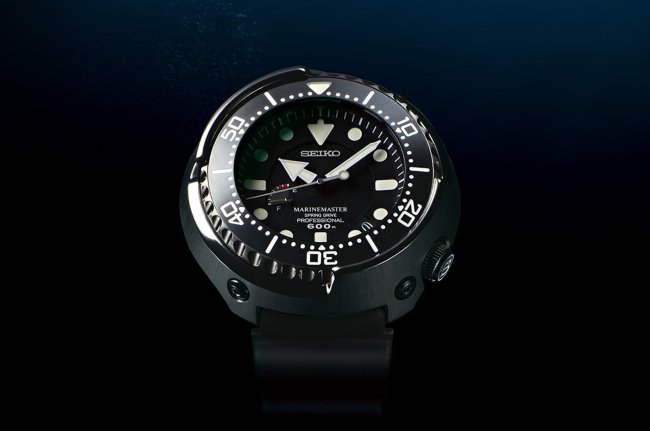 Seiko is one of the most well known watch brands available today, but how many people know the history of how Seiko's diver focused range came to be?

2015 marks the 50th anniversary of Seiko's launch into their popular divers range, releasing their first dedicated divers watch in 1965. This watch was rated for 150 meters and featured a stainless steel case with an automatic movement, and the success of the model lead to a significant amount of research and development by Seiko into ensuring their watches could handle anything they were asked to. In 1966, the watch was used in the 8th Japanese Antarctic Research Expedition and proved itself by enduring the extreme conditions without issue.

The next step forward was in 1968, where a 300 meter, high-precision mechanical was released. Changes include a new sealing system, brighter hands and illumination for easier viewing underwater, and an offset crown to reduce the likelihood of an impact moving the crown seal out of position as well as the option of manual winding in addition to the automatic movement.

The big change in Seiko's divers range that resulted in a much larger focus on their divers range was due to a professional diver in Hiroshima stating that no watch he had used to date could withstand the stress of extreme depth diving. Seiko's engineers took up the challenge and 7 years later in 1975, they released their first 600 meter professional divers watch.

Featuring a range of unique technology built in, it was the first divers watch in the world to feature titanium casing, alongside a 2 layer case design to increase strength and reduce the effect of impacts and shocks. It also featured a unique rubber band designed to expand and contract with changes in pressure to ensure the watch remains secure on the wrist at all depths.

In 1978 Seiko released a watch using similar construction methods, but using a highly durable quartz battery movement. Also rated to 600 meters, a pair of watches were successfully field tested in 1983 at a recorded depth of 1,062 meters, fixed to the exterior hull of a Japanese manned research submersible, the SHINKAI 2000.

1982 featured a combined analogue/digital divers watch. Rated to 150 meters, alongside the analogue dial, the watch contained an upper digital display that powered an alarm chronograph, with an audio system that allowed the alarm to be detected underwater.

1985 marked the release of Seiko's 200 meter range for recreational divers. Available in both quartz and mechanical, these watches attracted a huge amount of attention and were some of the most popular watches of the time.

In 1986, Seiko launched their new professional divers watch, rated to 1,000 meters. It featured a 2 layer ceramic/titanium case which greatly reduced the overall weight while also improving the strength and corrosion resistance of the casing.

1990 marked yet another world first, with the launch of their first computerised diving watch. This was a fully digital watch containing water and depth sensors, as well as recording diving time and the current depth.

In 1992, Seiko launched their Kinetic line, featuring a 200 meter divers watch with the accuracy of a quartz movement, but the reliability and strength of a mechanical.

Seiko released another 200 meter digital watch in 1995, which featured a depth gauge and diving time display, while adding a dive log which could be viewed while still underwater. In the same year, an analogue kinetic was released with a 24 hour hand and a new design titanium case for improved durability.

Later that year a fully analogue 200 meter watch was released with an automatic depth indicator, as well as being able to display set warnings and logging dive data.

In 2000, a new computerised watch was released. While only rated to 100 meters, it featured a fully digital display with a depth log. It was made to be suitable for both regular diving, as well as extended diving sessions using nitrox, which requires less stops to allow decompression when surfacing.

In 2005, Seiko launched their constant motion Spring Drive collection with an analogue 600 meter divers watch. Using a combination of unique mechanical technology as well as components from their Kinetic range, the watch featured incredible accuracy and durability for a mechanical movement. The case was made from titanium with a scratch resistant sapphire crystal glass.

In 2014, four 1,000 meter Seiko Marinemasters were put to the test. Randomly chosen watches, both quartz and automatic (model numbers: SBDX011 and SBBN013), were fixed to the hull of a Japanese unmanned submersible, the KAIKO 7000II and lowered to a depth of 3,000 meters where they continued to operate without interruption.

Continuing the dive, the quartz watch failed at 3,284 meters, with the pressure increasing enough to cause the second hand to stop, the mechanical watch continued onto 4,299 meters before stopping. Even at that depth, the sealing system of all 4 watches held up and prevented an ingress of water into the movement.

Seiko's current flagship divers watch is the SBDB009 Prospex Tuna Spring Drive Marinemaster rated at 600 meters featuring their dual-layer, diamond-like coating, titanium casing design, with high visibility dial and hands, as well as the 5R65 movement based on their far more expensive Grand Seiko line. This watch features a combination of everything Seiko have learnt over the years, resulting in an incredibly durable diving watch ready for anything the owner can throw at it.